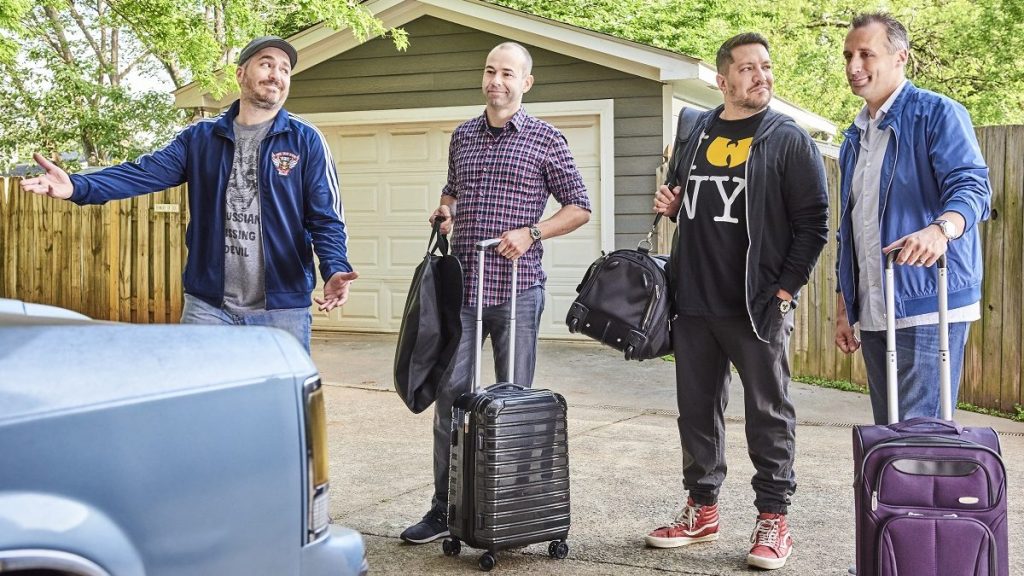 The feature film, which is screening in limited theaters now and hopefully will expand to more in the coming weeks, tracks like an extended episode of the series. There’s a manufactured story that bookends the plot, and comes off as the hokiest part, as the comedic foursome sneak into a Paula Abdul concert, ruin it, and are thus determined to recify this mistake when they get the chance several decades later. Aside from a running joke about Sal Vulcano getting punched in the throat, these parts are not that funny.

But that’s the only aspect of Impractical Jokers: The Movie that falls flat. When Sal, Joe Gatto, James “Murr” Murray and Brian “Q” Quinn are left alone to do what they do best, they deliver non-stop laughs. They also take full advantage of the wider scope (and presumably additional budget) that comes with making a movie, because some of their setpieces are just as big as you’d expect on the big screen. They crash a movie premiere event, give a speech at a networking conference, and get a few good sight gags out of what’s hiding in Murr’s hotel room.

It’s hard to go into too much detail without ruining the film, because a good deal of the enjoyment comes from being surprised, often along with one of the Jokers themselves. But the majority of the film is constantly hilarious, and the rules of the show are easily explained near the top of the movie so newcomers can immediately jump in. There are a series of challenges, just like an episode of Impractical Jokers, except they lead to a reward for the winners instead of a punishment for the loser. And breaking them up are individual scenes involving certain Jokers, the film equivalent of “targets of opportunity.”

If you’re a superfan, you’ll notice plenty of in-jokes from the beginning to the end. The license plate on their car starts with “LRY” which prompts fans to think of Joe’s never-ending quest for Larry. Sal’s conspicuous Jaden Smith tattoo figures heavily in one of the movie’s best scenes. Q talks to one of his beloved cats. Several well-known jokes from the TV show are surprisingly not included, but there are enough to make this extra fun. And keep an eye out for Will Ferrell; not only did his Funny or Die produce the movie, but he makes a cameo appearance.

However, that brings us to the other criticism of Impractical Jokers: The Movie. There are a few familiar names in the closing credits, but it appears that the film didn’t utilize all of the same crew members, which means that almost all of the TV people who have become part of the family don’t turn up in the movie. Producer Chase Dominick has a speaking part in one of the challenges, and Casey Jost (who hosts the spinoff series Inside Jokes) plays Paula Abdul’s faux assistant.

But it would have been great to have more of the crew; even if we’d just seen someone like Terry Thomas or Cole Weber in the background of a shot somewhere, that would have made the movie even better because we’ve come to love seeing them, too. At least we get visits from a few of the Jokers’ family members, but telling you who and where would again ruin the fun.

Those complaints aside, this movie is otherwise flawless. This should be the example of how to bring a TV series to television correctly. It expands to fill a feature-length run time without feeling like it’s stretching jokes too far or excluding anyone who hasn’t seen every episode. Using the challenges idea from the show creates a clear structure, and keeps things moving along pretty quickly. No bit overstays its welcome and because the jokes land so steadily, it makes the movie practically fly by.

Most scripted comedies are nowhere near as funny as Impractical Jokers: The Movie. It just goes to show you how entertaining Sal, Joe, Murr and Q are, and how they’re at their best when left to their own devices. They don’t need a film script. Heck, they don’t even need a wide release. They’ve created a cult hit that anyone who loves comedy will be rolling in the aisles from.

Impractical Jokers: The Movie is in select theaters now. You can find a list of theaters and purchase tickets here.